With the Family in Namibia

Andy and I always said once our second son Shep turned four, we'd take the boys on a 4x4 journey in Namibia.  There are four years between our boys and our first born, Solo is now eight.  Solo had been to Africa three times by the time he was Shep's current age, and as much as we would have liked to give Shep the same early life experiences in Africa as his older brother, with two small kids, several country moves for our family to Asia, Europe and then back to northern Australia, plus a business that started just before Shep was born, that clearly wasn't going to happen quickly or easily.  So there had been much anticipation around Shep's first trip to Africa in June this year and when it finally happened, for both boys, it was just mind-blowing.  I don't think you can guess at what your child will get out of being in the wild until you put them out there.  Both Solo and Shep loved Namibia, but in different ways.

Solo, who has always been obsessed with cars but in particular 4x4s, could not have been happier than in the land of Land Cruisers, Land Rovers and Toyota Hiluxes.  Everywhere you look in Namibia there's another awesome spectacle for the 4x4 lover, and you get to truly test them out, but best of all, on safari you get to drive in open vehicles with no doors and no windows, just a ladder to climb up onto the seats.  Pure awesomeness!

Shep, it turns out, has a sponge-like mind for any little detail he can find out about every single animal on the planet.  He's not the kind of kid you can give a simple answer to.  If he sees a zebra, he's like "What kind of zebra is that?"  When we spotted a chameleon on the road, it was the ultimate fascination.  "Look it's got a springy tail and a long tongue and that's how it catches it's prey!"  All I can say is that all that early conditioning on youtube watching David Attenborough excerpts on a Saturday morning sure paid off! 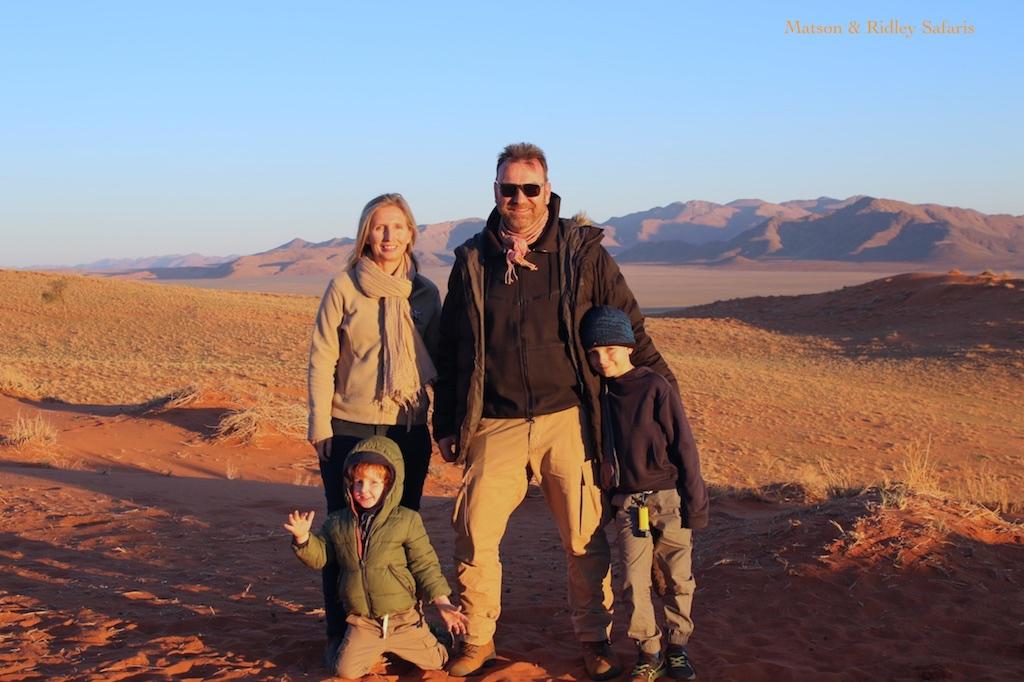 Over the past couple of months since we've been back, I've been putting together lots of short youtube videos filmed on my Botswana and Namibian journeys this year.  I'll be putting up one every week for the next couple of months, so there's lots more to come.  But in the meantime, here's a taster below, and you can subscribe to the Matson & Ridley Safaris youtube channel here.

I'm offering a unique safari in Namibia in July 2019, but it's only available for ONE MORE WEEK.  If you are contemplating going to Namibia with me next year, please get in touch now.  The focus of this trip is on rhinos and the desert-dwelling elephants and giraffes.  There are few places as good as Namibia for seeing critically endangered black rhinos and we're going to a place where the sightings will be excellent, followed by a real adventure to the new Hoanib Valley Camp, home to desert dwelling lions, elephants and giraffes.

How to sex giraffes

Shep shows us a leopard skull

Contact me for more information on travelling to Namibia here.