The World of Hyaenas

I'm a massive fan of hyaenas.  They're comical, cheeky and downright cute if you look at them from the right angle.  One person who agrees with me is Dr Martina Trinkel, who was studying spotted hyaenas in Etosha National Park when I was studying black-faced impalas for my PhD many years ago.  We both lived at the research camp at Okaukeujo, but for my first six months I barely knew her, as being a researcher of a nocturnal predator, she would go out at sunset to look for hyaenas just as I was coming back for a good night sleep after a day of studying impalas.  I would see her return home in the early hours of the morning, just as I was heading out.  You've got to be dedicated to be a predator researcher, out all night in the desert cold, patiently seeking elusive animals in the dark, but as this interview with Martina shows, she developed a huge respect for the hyaenas we all know and love from 'The Lion King'. 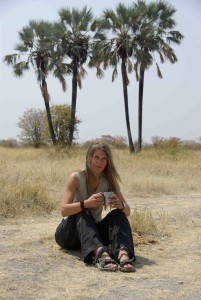 Martina has been working with spotted hyenas and lion in southern Africa for more than 15 years now, including working on the population and feeding ecology of spotted hyenas in Etosha National Park. In recent years, she has been concentrating on finding solutions for overpopulation and inbreeding of lions in small reserves in South Africa, and human lion conflict at the borders of Etosha National Park in Namibia. Together with Prof. Keith Hodges, she initiated the Etosha Rand Lion Conservation Project.

The footage below of these super cute hyaena pups was taken by me at a hyaena den at Chitabe in the Okavango Delta, Botswana, during my safari there last year.  Hyaenas are one of the most interesting animals to watch in the African bush.  They're always looking into what mischief they can get up to, and never miss an opportunity.

As Martina explains below, there's still much about their behaviour that we have yet to learn.  Ever wondered why the female spotted hyaenas are bigger and more dominant than males, and have a pseudo-penis?  Well, I have.... Read on to find out!

Are hyaenas the real kings (and queens!) of the jungle?  How often have you seen them come up against lions and win?

In Etosha, the number of spotted hyaenas is very low, and range sizes are large. Therefore, clashes between lions and hyaenas are very rare. To have a chance against lions, hyaenas have to outnumber female lions by a factor of three. When male lions are present, hyaenas won’t challenge the lions at all. In Etosha, hyaenas usually avoid lions, which is very clever. The main causes of hyaena deaths (mostly young once) in Etosha are lions.

Why did you start working on hyaenas?  Can you tell us a bit about your work on them, what you were researching and why?

For me, hyaenas are one of the most fascinating and prettiest animals. They have a highly developed social structure. Females have the say, they are passionate mothers, defend their territory, chase strangers away from their kill, and choose their own mate. 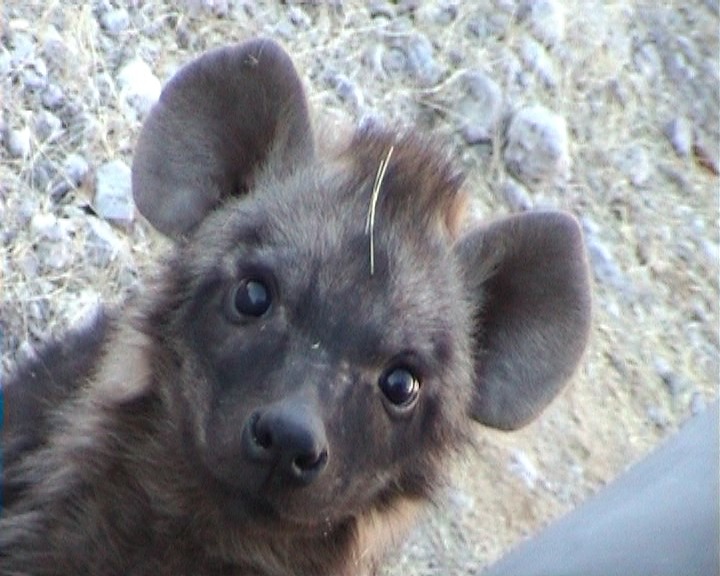 Where are hyaenas found in Africa?  Are they as common as we think?

The spotted hyaena is living in sub Saharan Africa, and occurs in extremely contrasting landscapes (savannahs, desert and semi-desert areas, dense mountain forests, swamps). Yes, they are common, but often their numbers are very much overestimated. For example, commercial farmers adjacent to the Etosha National Park, complain about “lots” of hyaenas. In truth, it is mostly only one hyaenas making lots of trouble, but it is not lots of hyaenas! 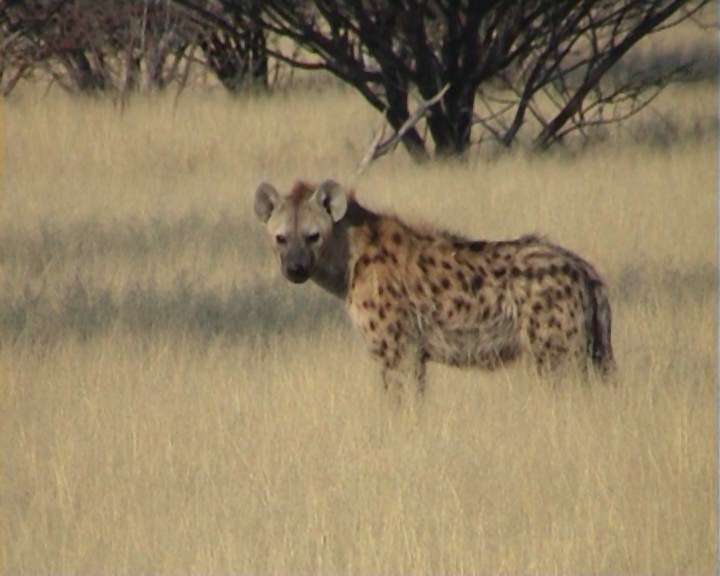 Both male and female hyaenas have a ‘phallus’ and females are larger in size.  What’s the theory on why this might be?

This is not well understood. There is a theory that a long time ago there was a shortage of food over a prolonged time period. This is when females had to get larger and larger to successfully compete with males to feed their cubs. As a by-product, the pseudo-penis developed. 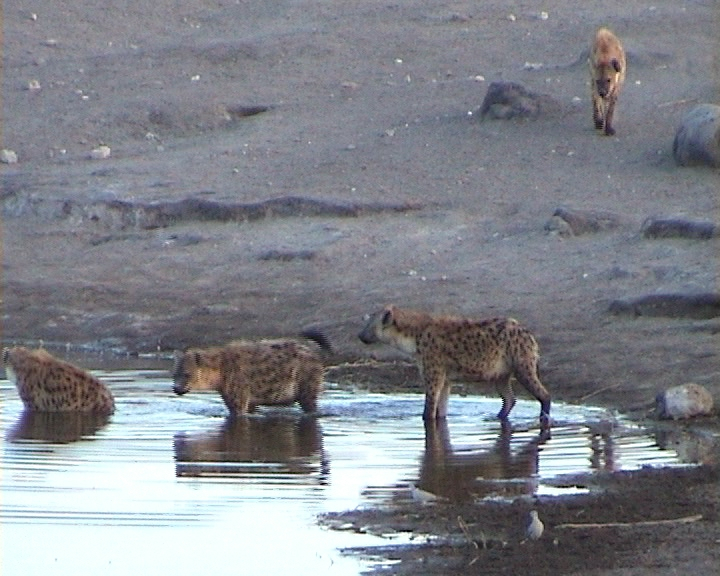 Hyaenas taking a drink in a waterhole in Etosha (credit: Martina Trinkel)

I like the way the females choose their mate. It is not the strongest male as in many other mammal species. Hyaena males are not especially aggressive. Instead, males spend their time courting the females. This is how they attract the female’s interest and are able to reproduce. 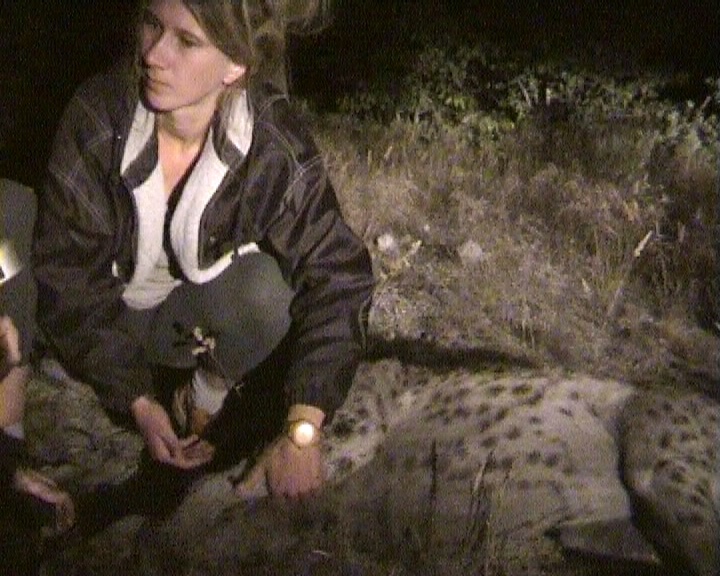 Once in Etosha a young hyaena poked his head in my car window, before biting my car tyre.  That was pretty exciting!  Have you ever had any up close and personal experiences with hyaenas that you could share?

Once I slept out in the field in the back of my car (which I often did after a long night watching hyaenas) and when I woke up early in the morning, I saw one hyaena walking straight towards my car. It was one of my study animals, a male. He stepped onto the car tire and pressed his nose against the window (which I also did). So our noses were just separated by the window. This was a special moment for me. 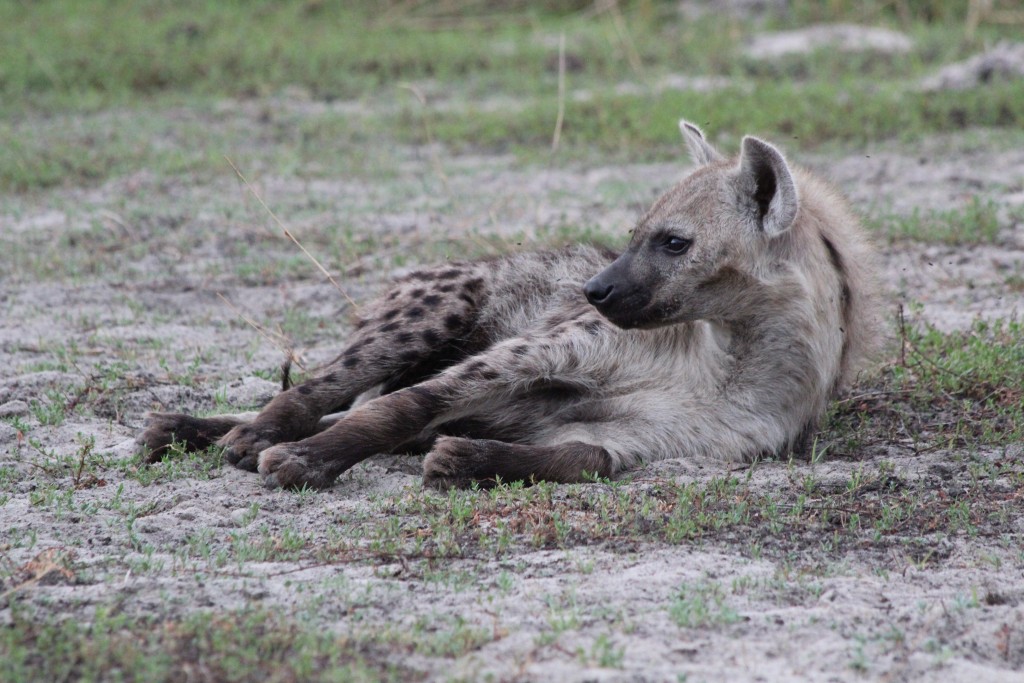 On my last safari in Botswana, our group spent some wonderful quality time with baby hyaenas of different ages at a communal hyaena den (see footage above).  Can you tell us a bit about how hyaenas are raised?

Mother hyaenas give birth at a private birth den, and after about 2 weeks, the females take their cubs to a communal den, where the sub adults and adults look after the cubs. It is a nice playing ground for baby hyaenas and it is a pleasure watching them. When adults are away to hunt, the cubs are supposed to stay inside the den. Once I watched two baby hyaenas, who did not want to stay in the den at all. Their mother walked away while continuously looking back to the den to make sure the cubs are hiding inside. When the mother was some distance away, the little ones come out. The mother rushed to the den and the cubs disappeared. The cubs (and their mother) repeated this for more than twenty times! 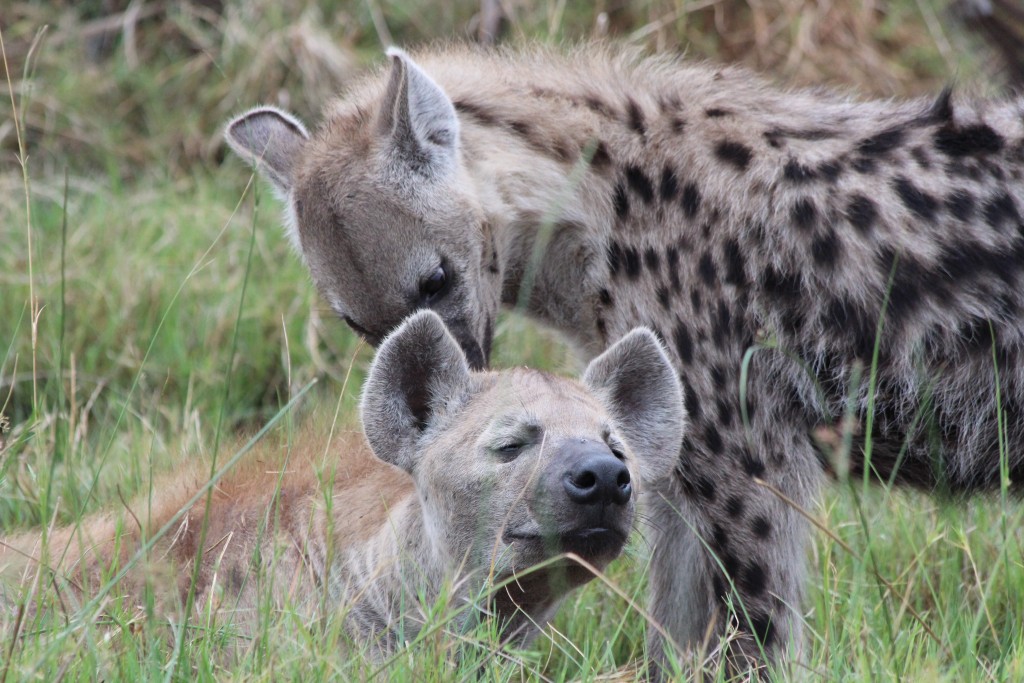 Fascinating animals indeed!  Social, devoted mothers and part of a female-dominated society, I'm left with even more questions about the intricate world of spotted hyaenas.  Time for another safari to learn more!

If you have a question for Martina about hyaenas, leave a comment here or go to the Facebook page below.  You can follow Martina's work with the Etosha Rand Lion Conservation Project in Namibia on Facebook by clicking here - https://www.facebook.com/LionConservationEtosha

I still have a few spots left for my Namibian safari in May 2016 - contact me now for details.