About a year or so ago I heard about a Melbourne-based team working to stop demand for rhino horn in Vietnam through targeted advertising.  The team, who are all volunteers, is led by Lynn Johnson on a project she founded called Breaking the Brand. They have the pro bono support of award winning Australian advertising team Nigel Dawson and Randal Glennon.  We all know how devastating the poaching of rhinos is across Africa now, and how hard the guys on the ground like Bryce and Lara Clemence in Zimbabwe (from a recent blog of mine) are working to stop the poachers, at considerable loss of life (human and rhino), so what's happening to combat the lucrative rhino horn trade at the source?  After all, if we don't stop that, we'll be fighting poaching and illegal trade forever, and that's just not sustainable.

My observations from living in Asia and investigating the illegal ivory and rhino horn trade there since 2012 is that not nearly enough is being done to reduce demand.  A lot comes down to educating people about the connection between what's happening to the animals in Africa (and the human toll too) and the products of those animals that they're purchasing in Asia. 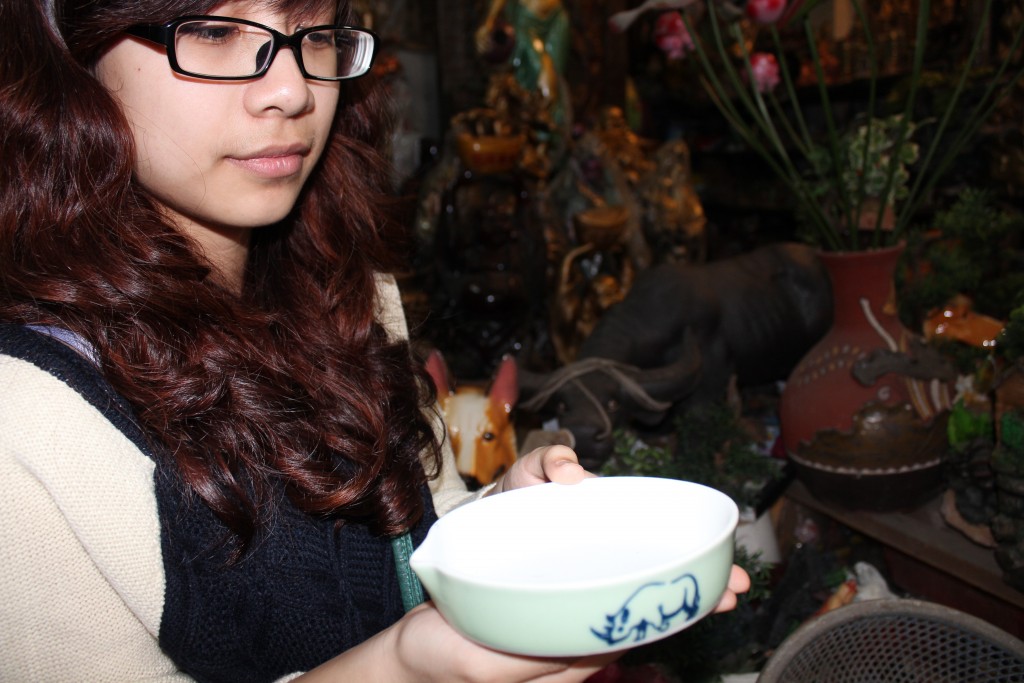 That's where my motivation for the Let Elephants Be Elephants campaign that I co-run with Asian TV star, Nadya Hutagalung, came from, and it's why I've continued to encourage Lynn's team in her considerable efforts to raise awareness on this issue in Vietnam.  The Breaking the Brand campaign is a project driven by passion, but also based on a relatively good understanding of who the buyers of rhino horn are.  Lynn doesn't have a lot of funds (and she'd love more - so scroll to the end of this blog to find out how you can help), but she has managed to pull enough together to do a pilot advertising campaign, which targeted the buyers of rhino horn directly by publishing adverts in top Vietnamese business and lifestyle magazines including full page adverts in Heritage, the in-flight magazine of Vietnam Airlines. Currently a second campaign is running to target Vietnamese New Year, 19th February 2015, as there is a spike in rhino horn use over this period.

I took the opportunity recently to interview Lynn about this novel, Australian-Vietnamese collaborative project.

The objective of Breaking The Brand is that by understanding the motivation of the primary users of illegal and/or endangered wildlife products we aim to build campaigns to influence the patterns of purchasing behaviour. Our initial project is focusing on the demand for rhino horn in Viet Nam. We called the project Breaking The Brand because unfortunately many of these wildlife products have become (luxury) brands to the users. Just like brands can be made they can also be broken, resulting in them becoming ‘unfashionable’ or obsolete.

From our perspective, only by understanding the effects of social, cognitive and emotional factors on the economic decisions individuals make will we have the ability to influence and shape them. We must put ourselves in their shoes to elicit their motivation to use/stop using these products. By creating campaigns in a currency that the user relates to, even if it does seem distasteful to us, we can start, re-start or change the conversation. This can lead to behaviour change in purchasing and lifestyle decisions.

The two campaign we launched to test the concept target the primary users of rhino horn in Viet Nam, namely high status males and affluent mothers. We launched the first campaign ‘Is it work the risk?’ on the 15th September 2014 and it ran until the 31st December. Then the second campaign ‘Will your luck run out?’ which targets the Vietnamese New Year was launched on the 16th January and is still running. You can see the campaigns via: http://breakingthebrand.org/campaigns/

By October 2014 Viet Nam jumped to third top country downloading information from our website. Also, Ho Chi Minh City and Hanoi become second and third cities following us on Facebook after Melbourne. This has all been done for less than AUD$60,000. 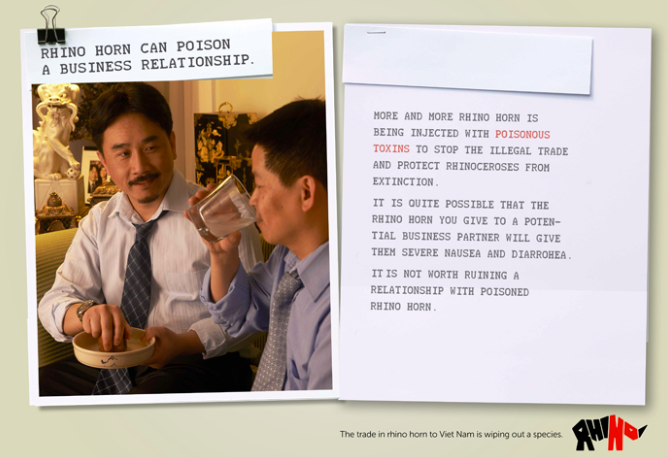 What got you interested in the rhino conservation issue?  What’s your background?  Why are you passionate about this?

Lynn Johnson, who heads up the Breaking The Brand project

As a kid in the UK in the 70’s I was addicted to nature TV, Animal Magic, Survival, Wildlife on One, Life on Earth, Johnny Morris, David Bellamy and David Attenborough. The emerging debates at the time about how people needed to protect the natural world and how you could and should take action resonated. The family home was in town, on a bus route, and the bus stop was directly outside the house. I decided my bedroom window would become a billboard for all that I cared about and the passengers on the top deck of the bus where confronted with posters on everything from save the whale, stop seal clubbing, anti-fox hunting, pesticide and birds of prey, anti-fur trade, save tigers, save elephants, beauty without cruelty……the list went on. Over the years I have signed petitions, collected signatures, made personal donations and helped fundraise for a range of campaigns. So creating the Breaking The Brand project was just linking back to something I am really passionate about.

From an education prospective I’m a nerdy scientist. I have a PhD in particle physics and I love solving complex problems. The bulk of my professional life has been working in the areas of leadership development, executive coaching and corporate culture change. I have had my own business since 2001, Leadership Mastery and the bulk of my work has been coaching business leaders and organisations through behaviour change in response to changing expectations and/or market conditions.

Recently you visited Vietnam - can you tell us about what you saw there in terms of illegal rhino horn trade?

While in Vietnam I stayed at a hotel on “Traditional Medicine” street, Lan Ong Street, Hoan Kiem District – featured in BBC Newsnight. Most of the shops openly advertise they sell the dish to grind rhino horn in. Why sell the dish if they don’t sell the horn (fake or real)? It is just another indication that they aren’t worried about policing.

Probably more worrying is that what I saw was just the tip of the iceberg when it comes to the growth of local wealth. The cities remind me of Berlin and Prague in the 1990s; the amount of restoration and construction is staggering and the number of luxury brands primed to enter the country is very telling about the increasing spending power. Lost count of how many luxury cars I saw driving around. The capacity for growth is mindboggling. Culturally and historically these people are skilled merchants and traders; they know how to quickly build new customers base and find it easy to sell. The next 12-24 months will be critical in undermining ‘fashion trends’ such as rhino horn use. 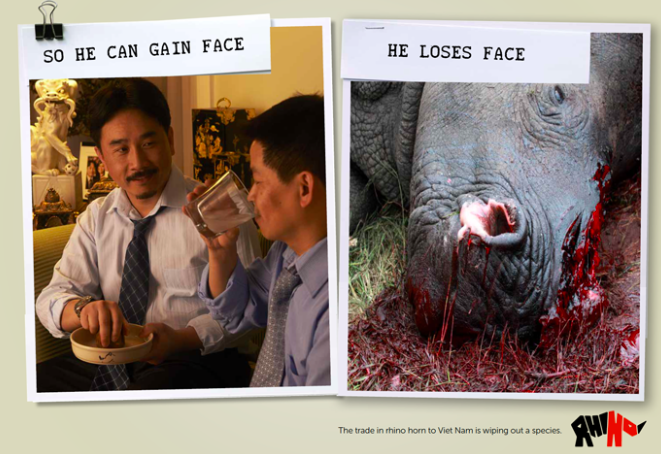 Who does your ad campaign focus on and why?

Throughout 2013 and 2014 we interviewed Vietnamese people in the expat community in Melbourne and in Hanoi and Ho Chi Minh City. What we found was awareness raising with the customer alone is not enough to curb the poaching, given the lack of empathy with the rhino from the buyer. These users only have 2 motivations to stop before it is too late for the rhino:

Our adverts have focused on telling the users that more-and-more rhino horn is being infused with toxins. We have informed the users of the types of toxins being used and the health implication of ingesting them.

I would say that over 80% of the questions we get from Vietnamese media and community since the adverts were launched have been about rhino horn poisoning as a way to stop the demand. 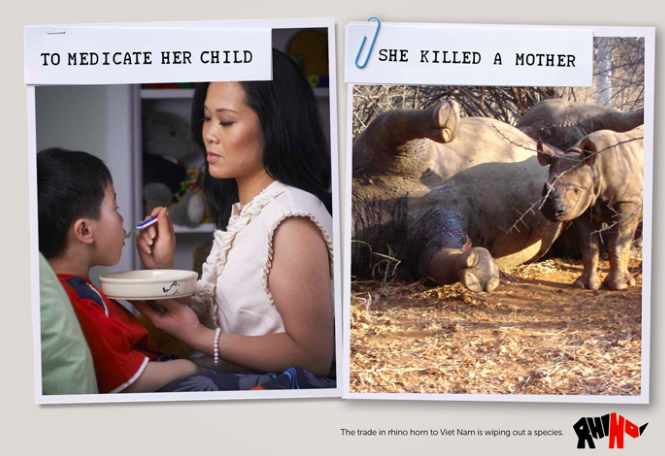 How have Australians helped support the cause and what can they do to help you?

Australians have donated about 85% of the funds needed to publish the adverts, followed by New Zealand then South Africa and then the rest of the world.

On top of that the representatives from the Vietnamese community in Melbourne have been incredibly supportive in helping with our research and linking us to people in Viet Nam who have been willing to be interviewed about their use of rhino horn.

Our volunteers have been amazing, we couldn’t have come this far without their support and many business have helped. The list goes on and on and we can’t thank them enough. Their encouragement and work on Breaking The Brands behalf has been amazing. 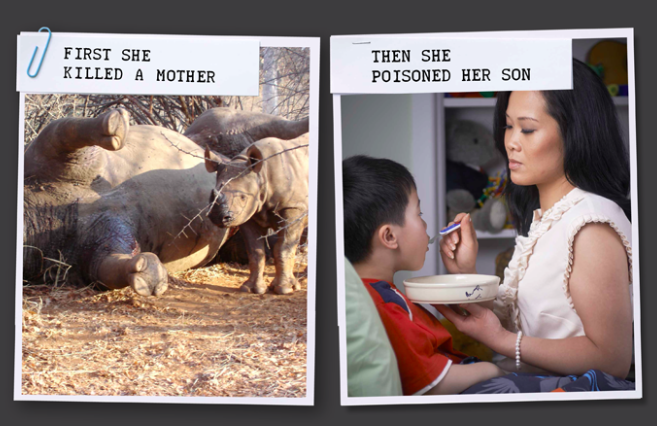